You are here: Home / Gardening / Fruits and Vegetables / How to Grow and Use Rhubarb
Share is Caring

How to plant, grow and store rhubarb, plus some fantastic rhubarb recipes.

Growing and Using Rhubarb
Rhubarb is a perennial vegetable that is used most often like a fruit as it is delicious in pies, tarts and sauces. Rhubarb grows well in most gardens – a half-dozen plants will yield enough rhubarb for four people.

Rhubarb Planting Guide
Rhubarb is usually propagated by dividing roots in early spring. Root stock is readily available in garden centers, but planting rhubarb from seed is not generally recommended.

The University of Illionois extension offers these planting tips:
– Plant the roots with the crown bud 2 inches below the surface of the soil. Space the roots 36 to 48 inches apart in rows 3 to 4 feet apart. Good garden drainage is essential in growing rhubarb. Planting on raised beds ensures against rotting of the crown. Working plenty of well-rotted manure or compost into the rhubarb bed before planting greatly increases production.

– Old roots may be dug and divided to make new plantings. Cut the roots into four to eight pieces. Each piece must have at least one strong bud. To improve vigor and leaf size, many gardeners divide the old plants and establish a new planting after at least 5 years of full harvest. Plantings older than this tend to begin crowding themselves out. Dig the roots of the most vigorous, healthy plants to establish a new bed the spring before the old planting is to be discarded.

Rhubarb Varieties
Recommended rhubarb varieties include Canada Red, with long, thick, extra sweet stalks; Cherry Red, which is a rich red color inside and out; Crimson Red, with tall, plump petioles; MacDonald, known for its brilliant red color and tender skin; Valentine, a good flavored rhubarb, and Victoria, which is shaded with red.

Care and Cultivation of Rhubarb
– Apply manure or compost in late fall or early winter, taking care not to cover the crowns.
– In spring, before leaves emerge, apply a complete garden fertilizer followed by a side dressing of high-nitrogen fertilizer three months later.
– Organic mulch is beneficial to help retain moisture. Water new plantings until established; older plants should only need watering during extended dry periods.

Harvesting
– First year rhubarb should not be harvested. Allowing the foliage full growth during this time helps build a strong root system.

– Second year rhubarb can be harvested for two weeks, with the harvest extended for 8 to 10 weeks in subsequent years.

– To harvest rhubarb, pull the stalks from the plant, rather than cutting. A slight pull and a twist at the base of the stalk should release it quite easily. Trim off the leaves, which are poisonous and should never be eaten.

– Remove only one-third of the stalks at any one time to keep the plant vigorous and healthy.

– If seed stalks develop, cut them from the plant as soon as they appear and discard.

– Yield and quality are at the highest when you harvest stalks that have just reached full size but before stringy fibers have a chance to develop. As a general rule, flavor is enhanced in stalks with deep red color. 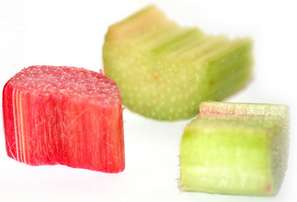 Storage and Cooking Rhubarb
Trim and discard the rhubarb leaves. Tightly wrap the fresh, unwashed stalks in plastic and keep in the refrigerator for up to three weeks.

To freeze, wash the stalks, remove any tough outside fibers, chop into 1/2 inch to one inch chunks and spread on a cookie sheet to freeze. Once frozen, seal tightly in plastic freezer bags or freezer containers. Frozen rhubarb will keep for up to six months and can be used in place of fresh in most rhubarb recipes. To prepare rhubarb for cooking, remove any brown or scaly spots or stringy fibers. Peeling is not required; simply trim off each end of the stalk, then wash and dry.

Cook rhubarb in non-reactive cookware such as anodized aluminium, stainless steel, teflon or enamel. Do not use pots made of aluminium, iron or copper as both the fruit and the pan will darken.

Rhubarb is very sour and requires the addition of a sweetener in most recipes.

For the Love of Rhubarb

I have great memories of the rhubarb that grew near my early childhood home on the backside of the garage. It was the sunniest part of the yard and that’s why it was located there, but it was hidden from the rest of the house and it always felt a little bit enchanting back there. The warnings about the leaves being poisonous made it a little bit forbidden as well and although I never used the leaves for food, I used to love to suck on the stalks. The leaves were relegated to doll blankets, elf hats, skirts, fairy boats and other useful items.

Rhubarb is one of the first vegetables (yes, it is a veggie) that I grew when I was a beginning gardener. It’s so forgiving that it’s a snap to grow. It comes back faithfully every year, is relatively disease free, needs little dividing or attention and produces a wonderful harvest.

While rhubarb is relatively maintenance free, I have learned after many years, that there are a few things that will help your rhubarb thrive. The stalks are actually pulled out when harvested, not cut. I usually end up cutting the leaves off right then and leaving them as mulch around the base. If I’m feeling extra energetic they go in the compost pile. When you harvest, you want the longest and biggest stalks, but only take 1/3 of the plant at a time or you will decrease its vitality over time. Rhubarb does well with a heavy feeding of compost in the spring or fall and it’s best to break off the seedpods before they go to seed.

Once harvested, it will last, covered, in the refrigerator for several days. It freezes well, and after I’ve had my fill of pie and the rest, I cut it into 1-inch pieces and freeze it immediately. I can then scoop out what I need over the course of the next few months.

Rhubarb Sauce
This one reminds me of my grandma. She used to serve it with corn bread and sausage on one of those simple, comfort food nights.

4 cups diced rhubarb, cut into 1/2-inch pieces
1/2 cup sugar
1/4 teaspoon cinnamon (to taste)
1/2 cup maple syrup (to taste)
In a medium stockpot, cook the rhubarb, sugar and cinnamon over medium heat for 15 minutes or until the rhubarb has broken down. Add the maple syrup to taste and serve.
Makes 2 cups

Preheat oven to 350°. Grease muffin pans or line with muffin papers. Sift together dry ingredients. Add oil, egg, and milk. Stir until just mixed. Gently fold in the rhubarb; then fill the muffin cups two-thirds full. Top with the Demerara sugar and bake for 20 minutes or until the muffins spring back when lightly pressed in the center. Let cool for 5 minutes before removing from pans.
Makes 10-12 muffins

Rhubarb Jam
4 cups diced rhubarb, cut into 1/2-inch pieces
2 cups sugar
1/4 teaspoon freshly grated nutmeg (optional)
Combine all ingredients in a medium stockpot and bring to a boil over medium-high heat. Reduce heat to a simmer, stirring often, until the mixture reads 220° on a candy thermometer.

Transfer to sterilized jars and seal. Refrigerate for up to 2 months or freeze for up to 6 months.
Makes 2 cups

Rhubarb Current Chutney
This recipe pairs well with pork tenderloin. It is easily doubled or tripled and freezes well if you are lucky enough to have a large patch of rhubarb in your yard.

About The Author: Anne Mahle is a captain and chef and spends her summers cooking for guests on the Maine Windjammer, Schooner J. & E. Riggin, which she co-owns with her husband. 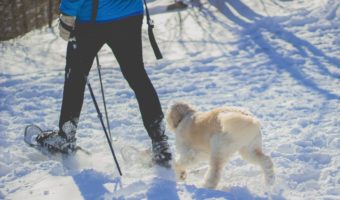